In the hours leading up to the early access release of MLB The Show 22, San Diego Studio hosted its latest live stream on its Twitch and YouTube channel. This stream, which was by far the longest of the Feature Premiere streams, featured several updates from Diamond Dynasty, live content, and Esports.

The first big update is a brand new single player mode in Diamond Dynasty called mini seasons. This mode features a 28-match mini-season where players will face their DD team against 7 CPU teams. The top 4 teams in the league at the end of the 28 games will advance to the playoffs. The playoffs feature two best-of-5 rounds to decide who is the mini-season champion. Players will be able to choose their difficulty level in each game during the mini-seasons.

The next big reveal is that the Round Programs and Team Affinity Programs have been combined and condensed into what are now called Featured Programs. These new featured schedules will only be available for a limited time, like last year’s round schedules. Players will also have a variety of ways to progress these programs such as Showdown, MTO Rewards, Daily Moments, and more. The main difference is in the rewards players can earn through these programs. 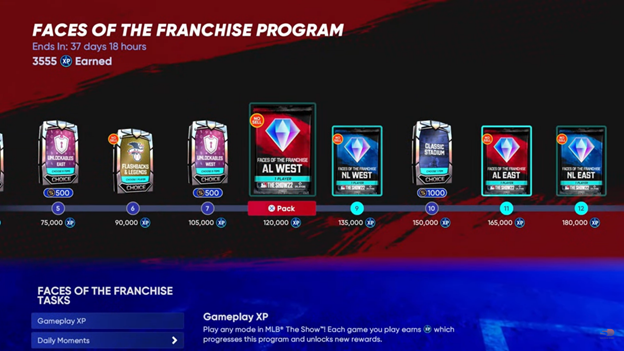 Last year, Inning Programs brought 3 main bosses, and players could choose one of the three. Team Affinity brought 30 bosses, one for each MLB team, and players could earn all 30. In featured programs, there are another 30 bosses, one for each MLB team. However, players will only be able to earn 12. The first six will be a random pack from each division that will not be sellable. The second six will come from a pick pack from each division that will be sellable. SDS didn’t say if players would be able to somehow earn the remaining 18 bosses through gameplay later this year, but at least at launch the remaining bosses will need to be purchased on the market.

This is a step in the direction of Madden or 2k, limiting the rewards players can earn through gameplay. We went from being able to win 31 of the 33 (94%) bosses available in the Inning and Team Affinity programs to only being able to win 40% of the bosses through Featured Programs gameplay. Only time will tell if SDS offers players a way to grind and get the remaining 18 bosses in the Faces of the Franchise Featured program. 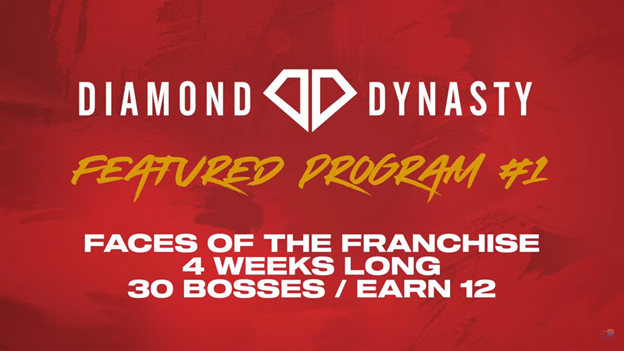 Quality of life updates from MLB The Show

Several quality of life additions have been made to the party modes that make up Diamond Dynasty. In Battle Royale, players can now earn the 12-0 pack without having to go clear in BR. This can be done by progressing through the BR program. Progress this year will be accelerated through custom draft rounds featuring the players needed to complete BR Program missions. Ranked seasons are now based on rounds played instead of wins. This is a great improvement and solves the problem of people dropping games early in MLB The Show 21. In events, players will now be able to save their queues between entries. The simulation time for games in Conquest mode has been halved. 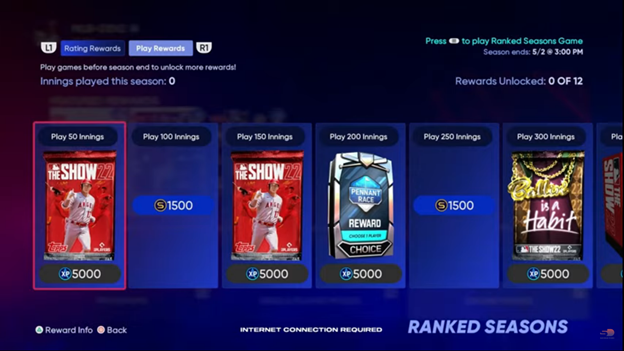 Another novelty is the Chase Pack. This pack is a topper for the 50-pack sets that can be purchased from the store, similar to last year’s Ballin’ is a Habit packs. However, this pack will contain very rare and valuable cards and items that will change throughout the year and will be exclusive to this pack. Chase packs can also be found in regular The Show packs.

The Live Series Collection rewards have also been revealed. The American League award is 99 Frank Thomas, the National League is 99 Roberto Clemente and the MLB award is 99 Randy Johnson.

MLB The Show 22 is available on April 5 on PS5, PS4, Xbox Series X|S, Xbox One and for the very first time on Nintendo Switch.

Want to talk sports and/or games with the fastest growing gaming community? Join the conversation by joining us on Discord and find out our twitter and our Facebook pages as well as our growing YouTube channel!

Play Tropico 6, For The King and MLB The Show 22 for free on Xbox this weekend